I Made My Own Acupuncture Needle! 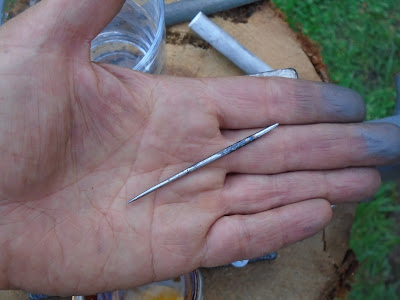 For many years now, I had the idea that I would make my own acupuncture needle out of a meteorite.  In ancient times, before the technology of smelting had been discovered, meteorites were one of the only sources of high-purity iron that, through firing and pounding, could be made into steel.  In ancient China, swords that were forged out of meteorite iron were considered to be not just functionally exceptional - harder, sharper, less apt to break in combat - but endowed with celestial powers as well.  It is hard to believe that acupuncture needles, associated from the very beginning with stars and the cosmos, would not have been made from meteorites.  The acupuncture points on the human body were regarded as a microcosm of the stars in the heavens.  What better instrument to illuminate our corporeal stars than a sliver of condensed heavenly yang qi?

Last year I turned fifty, and as part of the year-long celebration, went on a camping trip with my old friend Andy McKenzie.  I drove from Santa Cruz and he drove from Fort Worth, Texas, and we met up at Zion National Park in Utah. On a day trip to Bryce Canyon, we pulled into one of the many rock and mineral stores that dot the Southwest.  Inside, I found small chunks of meteorite on sale, and thought, "Aha! Finally, the raw material for my needle!" and bought a couple.

Over the course of the year, I designed and built a little outdoor workshop and smithy where I could try to transform my meteorite into a needle.  I figured that, since everything was on such a small scale, I could make a forge out of a blow torch and a fire brick or two.  All that was left to do was to actually make the needle!  So, the other day, I took advantage of the break in rain and got to work.

It took a day of firing and pounding, and another day of straightening and polishing, heat-treating and oil-quenching, and now I have my very own hand-made meteorite needle!

NOTE: you may be thinking, that needle looks awfully fat to be sticking into people!  Well, this type of needle, called teishin in Japanese, is not meant for insertion.  It functions as a detector and modulator of qi, and achieves its effects by touching the skin rather than piercing it.  This is the style of acupuncture that I practice, as taught by my teacher Anryu Iwashina ("Dr. Bear").


TECHNICAL CONSIDERATIONS:
Composition: This needle is made from a fragment of the Campo del Cielo meteorite that landed in Argentina between 4,000 and 5,000 years ago, and is 93% iron, 6% nickel, with trace amounts of cobalt, iridium, gallium, and germanium.  The cobalt is responsible for the bluing oxidation that occurs at around 900 degrees C; you can see a hint of it on the thicker end of the needle, where I left a cerulean sheen as a reminder of the needle's heavenly origins.

Dimensions: At 2 grams and 6.7 centimeters, my needle is a little lighter and shorter than my gold and silver teishin.  It handles very nicely and gets an instant qi sensation when touched to the skin.

Polarity: Acupuncturists who use teishin may wonder how I determined which end should be the pokey sedating end and which the rounded tonifying end. Unlike the gold and silver of the traditional teishin pair, iron, nickel, and cobalt are all strongly ferromagnetic. These metals lose their magnetism at high heat (called the Curie temperature; about 770 degrees C for iron) and then remagnetize as they cool if they are subjected to an external magnetic field. Since I was heating and cooling the needle in the earth's magnetic field, I made a point of aligning the needle as it cooled on a north-south axis so that the rounded end faces north and is thus  more tonifying. Please note there is some controversy about what the poles of a magnet do, therapeutically speaking, and even about how they are named.  Because I admire his experimental and clinical approach, I am adopting Yoshio Manaka's method and deem the north-facing end (+) to be tonifying.  Personally, I think that needling technique is the more important determinant of what happens in a patient's body during a treatment.  I am not a practitioner of magnet therapy per se, but figured that since my needle will be magnetic by nature, its polarity should be theoretically consistent with the use of magnets in acupuncture.
Posted by Kaz Wegmuller at 10:44 AM

Good post. I didn't know such method exists. But what I understand now is, there really is more to kendall acupuncture than just sticking needles.

Kaz Wegmuller
My name is Kaz Wegmuller. I am an acupuncturist and herbalist. The methods I use - herbal medicine, scraping, cupping, stone ball, moxa, non-penetrating handmade meteorite needles - are relics from an ancient time. I believe that many of our ills stem from our modern lifestyle, and that the medicine I practice is effective because it presents the wisdom and healthcare methods of the pre-modern era in a way that our bodies immediately recognize, and respond to. Integrative cancer care, treatment of pain, digestive issues, and women’s health are some of my specialties, but I always welcome new and unusual cases as an opportunity to apply the unique problem-solving logic and methods of East Asian medicine. Many of my patients are those who are sensitive to and appreciate the flow of energy in their bodies: healers, yogis, dancers, martial artists. They are usually delighted at what instantly starts to happen inside their bodies when I touch a needle to their skin. Similarly, patients who are too sensitive for regular acupuncture find their way to me and benefit from my gentle but effective treatments. I can be reached at 831-706-6125 or kazwegmuller@gmail.com.